Parts Of Speech: 8 Basics Of The English Language

As with everything in the English language, nothing is cut and dry. We will discuss the 8 parts of speech and how and when to use them in your writings. Many of these you know but do you know the rules for each?

In total, there are 8 parts of speech in the English language. Namely, these can be classified into noun, verb, adjective, pronoun, adverb, conjunction, preposition and interjection. One must understand that these parts of speech are important because they help us understand how English grammar works. Also, the fact that words that we use have certain connotations behind it and the 8 parts of speech help us in identifying these. Let’s take a look at these, one by one:

1) Noun:
The most common and easy to be understood part of speech is the noun. A noun typically represents the name, animal, thing or idea. Furthermore, a noun is divided into two categories, proper noun, and common nouns. The difference between the two is that proper nouns start with a capital letter. For example, the name of a person or a city.

2) Verb:
A verb is a word that represents an action or being. A verb can also use helping words in order to complete a sentence. A verb must follow correspondence with its subject, this essentially means that if the subject is singular then the verb must be singular and vice versa. For example, Adam can hit the ball far. Here, can is the helping verb, whereas hit is the main verb.

3) Adjective:
An adjective is a word that expresses quality and in a certain way modifies a noun into something that tells about it. For example, She is a pretty young girl to be singing that magnificently. Here young is an adjective.

4) Pronoun:
Pronouns are words that are used in place of a noun. These words are usually substituted in place of a noun and are classified as antecedents. There are further three types of pronouns, possessive, personal and reflexive pronouns. For example, the boy brought me a bouquet of flowers and then he ran away. Here me, and he is pronouns.

5) Adverb:
An adverb works to modify a verb or an adjective. The adverb in a sentence tends to answers questions such as where, why, how and when. An adverb never modifies a noun. For example, the boxer was extremely aggressive during the fight. Here extremely is an adverb which indicates the intensity.

6) Preposition:
A preposition is a word that is placed before a noun or even a pronoun. This is done in order to form a phrase that modifies another word into a sentence. Prepositions are also used to help clarify when an event or action happened or when an even or action will happen.

7) Conjunction:
A conjunction is a word that joins two phrases together. These words are some of the most commonly used in English speech. Most common conjunctions include and, or and but. For example, He rescued the little girl and made sure that she went to her parents. Here and is a conjunction that joins the two sentence.

8) Interjection:
The last 8 parts of speech are the interjection. An interjection usually expresses an emotion or describes a sound. For example, Alas and Hurray.

Parts Of A Sentence

The subject of any sentence serves the purpose of introducing the questions of who or what that sentence is referring to. Examples of this are:

Now that you have simple subjects down and a little insight of what a modifier is, all you need to do now is add that all together and you have a complete subject, which is a combination of a simple subject, your main phrase or word and your modifier. The modifiers are what makes complete subjects special and what essentially gives life to a simple subject. The general rule of modifiers, which again are your adjectives and adverbs that describes something in a sentence, is to be placed as close to the word or phrase that it is describing.

Without modifiers, the story that the author is telling would surely be a boring one as you saw in the examples of simple subjects, but you also want to be sure that you place the modifiers correctly, if not, your sentence may be very confusing to your reader. No worries though, I will give examples of this so that it makes sense, but first, let’s take a look at some examples of complete subjects, and the way to identify the complete subject is to ask; who or what is performing the action and the modifiers, or the descriptive words in the sentence.

As you can see, complete subjects are more… complete and has more meat to the sentences than simple subjects does. Let’s take the first sentence, who or what is the main word or words? In other words, who or what is the sentence talking about? What is more expensive in insurance than other cars? Red sports cars are, so that is your complete subject, which you see includes modifiers that describe it, which in this example is the adjective, which is the color red and the adverb “more” which describes the verb expensive.

Lastly, in the third example, what is extremely long yet eyeopening? You got it! The bestselling new novel is your complete subject. It’s modifiers that describe the bestseller are the words new, extremely long, and eyeopening.

Now that you have complete subjects down, we can now move on to the third subject type, which is compound subjects, but before we do, as promised, let’s take a look at some examples of misplaced modifiers. As I mentioned above, you want to make sure that you place your modifiers, or your descriptive words correctly in a sentence so that it makes sense to your reader, if not, what you are wanting to relay may not go over too well. Examples of misplaced modifiers are:

Ok, so things are a little confusing wouldn’t you say? Let’s look at the first example, is the wife or the dog named ginger? “Named” is our modifier so the correct version of this sentence would be; “Greg gave a dog named Ginger to his wife.”

In the second example, did the Uber driver really almost drive passengers!? I would pay to see that! As you see, the modifier “almost” is misplaced, let’s fix this so that it makes sense; “The Uber driver drove passengers for almost nine hours yesterday.” Whew, that’s better!

As you can see, modifiers and how they are used can be just as tricky as the complicated English speech. Before we move on, here is a quick rule of thumb. Be very careful of the adverbs almost, just, merely, nearly, and only, if placed incorrectly; these words could unintentionally change your sentence’s entire meaning as you see in the last example.

Now that we have looked at simple and complete subjects, let us now take a look at compound subjects. Compound subjects are nothing more than two or more simple subjects, and because of this, this type of subject does not consist of any words that would modify the subject.

So, let’s take a look at each example. In the first example, ask yourself who slept the day away, that is the compound subject so Thomas and Angie is your compound subject. As you see per the rules of this subject type, the sentence is joined by the conjunction and the verb slept.

For the second example, what is in the forecast for the week? Snow, ice, and freezing rain is the compound subject joined by the conjunction and.

For the last example, who is not planning a surprise? Neither Brett nor Chet is so they are the compound subject, joined by the conjunction nor.

Compound subjects are helpful in the fact that they can help alleviate repetition, something that every author wants to avoid for clarity purposes. An example of this is as follows:

Although this is a compound subject, as you can see, this sentence does not flow as good as it could. A simple correction can be made to make this sentence flow much better. Let’s take a look:

What we have discussed is essential to your story writing career and your success in it. To fully understand the 8 parts of speech and the different parts of a sentence is as equally as important so it is a must that you practice and review the details of each until you fully grasp each and every concept. 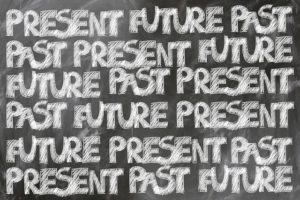 English Tenses: The Past, Present, and Future Of Writing